Dr. Malone dove deep into the mechanisms of action of the Covid-19 injections.

Dr. Robert Malone is a doctor and scientist. His mission is to ensure vaccine safety, make sure that children are protected, stop and/or limit vaccine mandates, identify and teach about lifesaving treatments for Covid-19 and other pandemics

A clip of Dr. Malone’s presentation can be found here.

Kim Witczak is an international drug safety advocate. She became involved in pharmaceutical drug safety issues after the sudden death of her husband in 2003 due to an undisclosed drug side effect. Kim was instrumental in helping to get FDA Blackbox suicide warnings added to antidepressants.

Kim launched a national public awareness campaign through WoodyMatters, a grassroots organization dedicated to making sure the patient perspective is represented in healthcare conversations.

A clip of Kim’s presentation can be found here.

No More Silence is an international organisation that supports those who have suffered injury as a result of the vaccine. We are honoured to have the founder, Ria Heslop-Hayes join us as well as Danee Dixon who will be sharing her personal experience and journey with her injury from the vaccine. 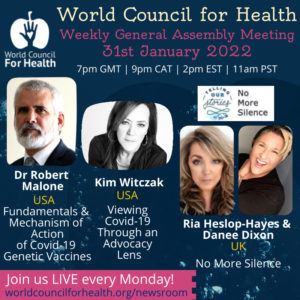 This is an edited segment from the weekly live General Assembly on January 31, 2022.

This video is also available on Odysee and Rumble.

Support the World Council for Health

Your support helps us to further our mission for civil-society-driven world health. A better way for a better world.

Stay up to date with resources, guidance, and events for health and world wellness

About World Council for Health